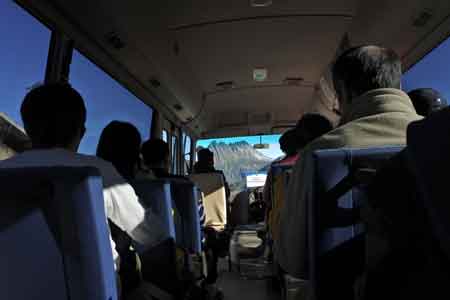 Tilting the head slightly to the side, the landscape comes into focus.

My central cloudy vision is unable to reveal any details of this familiar magnificent view extending for miles. Excited gasps and comments indicate the enjoyment of those crowded along the railing.

This has been an interesting day trip with many other older people, all piled in a bus with a very new driver. It is a mystery why someone who is so unsure of routes within the area, has been given the charge of 40 elderly, anxious people.

Touring the city centre was fairly safe, with well signed streets and obvious landmarks, but once the less travelled roads were encountered, the shortcomings of the driver became very obvious. Arriving at a crucial intersection, passengers were unnerved to hear him ask over the speaker, “Does anyone know which way we go?”

Most people were unfamiliar with the region, so I called out “Left!”, knowing full well the righthand road would lead back to the city. This had been part of my allocated area for selling rural insurance   for many years. A job I loved. Every road and every turn extremely familiar, even now, when I am forced to walk with a white cane.

How much comfort it must give the other passengers to know that their inexperienced bus driver has a self-appointed legally blind navigator to assist him.