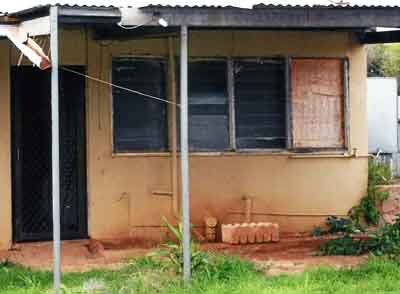 She sighed as The Green House came into view.

‘Halfway there,’ she said. ‘Only another two hours to go, or more if we stop.’

They had driven from Whyalla, and the little green cottage just south of Crystal Brook on the Augusta Highway was the half-way point from Whyalla to Adelaide.

She slowed the car and pulled up right outside the house.

‘There’s a For Sale sign, want to have a look?’

‘Good spot though, and I think there’s a bit land with it as well.’

He ambled off down the driveway and she followed, reluctantly.

‘The price is good, and it’s much easier to get to Adelaide from here,’ he said.

They peered through the front windows, noting the crumbling cracks in the verandah.

Making their way around to the back of the house, they just laughed out loud.

‘Ya can’t live in the ruddy shed,’ she replied. ‘It’s falling down.’

‘Only some of it. Anyway, it’s a pretty solid brick house.’

They continued the drive to Adelaide, he deep in thought, she not giving it any thought at all.

‘Really? Are you crazy?’

So they rang the Estate agent, and he showed them inside.

‘There is an order on the house,’ the agent told them. ‘Not fit for humans, so there is clearly work to be done to bring it back. Council need to inspect it.’

As they walked around, she began to catch his enthusiasm. I guess it could be OK. Himself needs a project now he’s retired, and we don’t really want to stay in Whyalla.

They talked about it over the next few weeks, had another viewing, and bought it. He was in his element. Every surface of the house had to be worked on beginning with the floors, then walls, then the ceilings, then the roof. Plumbing for a new bathroom, rewiring the entire house etc. etc. etc.

He camped in the sitting room while she packed the Whyalla house. He worked like a beaver. It was seriously interesting when some of the floors disappeared, then the loo. A porta-potty did help there. And so it went on, week after month. He beavering away, little by little, she now taking an interest with the important stuff. Like what colour for the walls, and curtains. The lounge had a wonderful feature wall of puce pink, and the main bedroom a deep donkey brown that needed to be covered. What were they thinking? she asked herself. That was nine years ago, and today, what is himself busy doing?  Fixing cracks and painting. Again.